A Specialized S-Works Epic frame was my life-time decision I did when I escaped a hardtail concept to a full-suspension race mountain bike. Nowadays, looking backward, it was a very good decision, although it was one of the first Epic frame concepts (the year 2004) with a proprietary FOX Brain suspension technology. 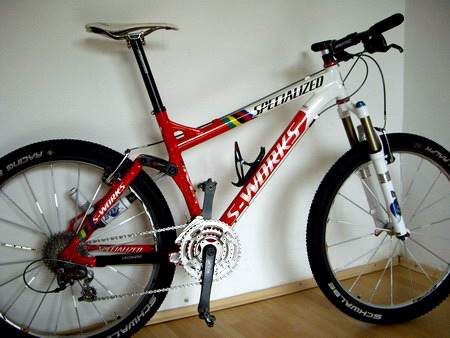 I had been riding this frame for some time when I decided to experiment a bit. I was looking for something special, unusual, thus I took airbrush design in the year 2006. At the same time I decided to change my helmet as well as the frame’s design. That was my first experience with bike tuning by airbrush.

The next design change came in the year 2008 when I was repairing the final finish of the frame and I "airbrushed" the FOX Float R Brain shock. The custom shock design followed the factory design of FOX F100RLC fork in all details. The last change rose with a Specialized 3D badge on a head tube. More information about shock tuning and custom head badge you can find in section "project".

I used my "old-school" Shimano XTR V-brakes with ceramic pads. They came from a newer Shimano XTR M970 group (like SPD pedals) and I was quite satisfied. A Shimano XTR M952`s combo set of brake and shifter levers was replaced by the SRAM X.0 system, thus the shifting was under SRAM X.0 Twister control and brake levers were taken from Extralite.